Do you like shopping? The answer may partly depend on one factor: whether you are male or female. Of course, it’s a generalization to say that, "Women like shopping, men don’t"—I’m sure we all know people this doesn’t apply to (my wife, for example, doesn’t particularly like shopping). However, there is evidence that this isn’t a complete myth. A survey of 2,000 British people conducted in 2013 found that men become bored after only 26 minutes of shopping, while it took women a full two hours. The survey found that 80 percent of men didn't like shopping with their partners, and that 45 percent avoiding doing so at all costs. Almost half of all spousal shopping trips ended in arguments, with men becoming frustrated because they bought what they needed straight away, while their partners were still looking and taking too long to make decisions. 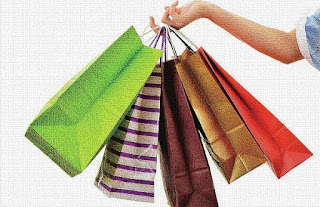 If there is some validity to these generalizations - and if they are more than just the result of social conditioning - where could these different attitudes to shopping stem from? I have had a "pet theory" about this ever since writing a book called The Fall (link is external) several years ago, which involved research into early human history and anthropology.

The Hunter-Gatherers
For hundreds of thousands of years, until around 8000 BCE, all human beings lived as hunter-gatherers—that is, they survived by hunting wild animals (the man’s job) and foraging for wild plants, nuts, fruit, and vegetables (the woman’s job). I learned a lot of surprising things about the "hunter-gatherer" lifestyle in my research. For example, it wasn’t a particularly hard life. When anthropologists began to look systematically at how modern-day hunter-gatherers use their time, they discovered that, far from exhausting themselves in their search for food, they actually spent only 12 to 20 hours per week at it. (This led anthropologist Marshall Sahlins to call hunter-gatherers “the original affluent society.”)
Interestingly, women were the main "breadwinners" in hunter-gatherer groups. Anthropologists estimate that women’s gathering provided around 80-90 percent of groups' food —a fact which has led some anthropologists to suggest that these peoples should be renamed gatherer-hunters. This is also meant that their diet was largely vegetarian (only around 10-20 percent meat), and also quite healthy, with a wide variety of fruits, vegetables, roots and nuts, all eaten raw.

Ancient Instincts
Beginning in the Middle East, human communities began to switch to farming around 8000 BC, and slowly, over the following millennia, the practice spread widely throughout Asia and Europe. But after so many hundreds of thousands of years of living that way, it’s no surprise that hunting and gathering are still instinctive to us. And this brings us back to shopping—because these instincts may show themselves in our shopping habits. When most women shop, they are in more of a 'gathering' mode - browsing from tree to tree (or shop to shop) looking for ripe and nutritious fruit. They spend a lot of time examining the food, checking its freshness and edibility, and they discard quite a lot of it. At the end of the trip, they return home laden with a wide variety of food stuffs (or shopping bags).

In the same way, men's shopping habits may be related to their hunting heritage. This might explain why men appear to be more mono-focused, rather than browsers. In prehistoric terms, they have one thing in mind: kill an animal and go home. They don’t want to waste time browsing, and it’s not so necessary for them to examine their food acquisitions. They just look for animals, kill them, pick them up, and go straight home. Perhaps this rush to get home was based on the knowledge that if a hunter left an animal lying for too long, other animals or insects would start to eat it. Some dead animals would also have been heavy, and so difficult to carry around for long. Also, in hot and humid conditions, it wouldn't be long before meat would start to go bad.

Let me repeat that these are generalizations - there are undoubtedly million of men and women to whom these characteristics don't apply. And I'm obviously being facetitious in making these connections between modern shopping habits and hunger-gathering. But if there is a tendency for men and women to shop in these different ways, then they could be explained in terms of our hunter-gatherer past.
Of course, as with most "pet theories," I eventually realised that I’m not the only person who has thought of it. In 2009, anthropologists Kruger and Byker found very clear similarities between modern men and women's shopping habits and our hunter-gatherer past. They found that women "scored higher on skills and behaviors associated with gathering, even though the environment and the objects being gathered have changed with respect to our ancestral environment....Men scored higher on skills and behaviors associated with hunting." They found that women were more inclined to spend extended time browsing around shopping malls, while men more inclined to buy what they needed and then leave straight away.* Their findings supply empirical evidence for the connection I'm making in this article.

One good thing about this: It provides justification for our shopping habits. You can always use the excuse that you can’t help liking (or not liking) shopping because you inherited those instincts from our prehistoric past. More seriously, this might also help us to overcome the impulse to buy unnecessary material goods—items that we may not be able to afford, which often don’t bring us any happiness, and which are often produced by low-paid, exploited workers in poorer parts of the world—and which, on the massive collective scale that we consume them, contribute to environmental degradation.

Once you become aware of the reasons for a behavior, it becomes easier to control and overcome it. I’m not saying that we should stop shopping, but perhaps we should shop more sensibly, and bring our buying more in line with our needs than our desires.
But then again, I am a man, after all.

By : Steve Taylor, Ph.D. is a senior lecturer in psychology at Leeds Metropolitan University, UK.