Financial Inclusion - Regulators have failed us

I have come home to my rural village for the New Year vacation and come to know a concept called day loan. The good old ‘poli mudalali’ people have updated their business model. Informal Microfinance sector has infected almost all the rural villages in Sri Lanka. What they doing is, giving small amount of cash advances to poor people for an unimaginable interest.

A small firm with few loan collectors who are normally using a motor bicycle to collect the payments from the borrowers, ABC investment (Name is hypothetical) has the following loan scheme. They offer Rs. 10,000 to get back a sum of Rs. 13,000 and the amount should be paid in daily installments of approximately Rs. 200 along a period of two months. Sounds reasonable? Let me do some math.

Since all the interest rates, in financial world, are depicted in annual figures this is an effective interest rate of more than 100% pa. There’s another firm in this business and they does the business in an innovative way. Cashwagon.lk (you must’ve seen some series online advertisements on this). Below is a sample calculation of repayment for Rs. 10,000 cash advance, which is no different (indeed, it’s worse) than the previous case which I had described. 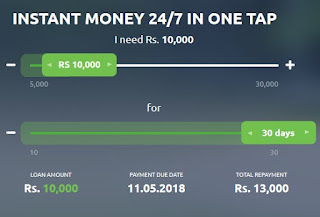 Turning back to the formal Microfinance sector of the Sri Lanka, They are no better than the informal sector. Effective interest rates of formal microfinance firms averages above 36% pa. Recently, a Non-Profit firm based on Netherlands, Berandina entered the microfinance business in Rural Nuwaraeliya and other districts. They have a staggering 24% p.a. interest rate on their loans. The hilarious fact is, all these loans are provided to reduce the poverty and to improve the well-being of the rural people.

Why people are choosing these lenders over formal lenders? There are two main reasons. First one is, they are convenient and they'll come to your doorstep. Second one is, reputed banks and finance institutes are not so fond of rural villagers since they have to lend millions of rupees to wealthy scumbags for nothing but to include them in the Non-Performing loans later. I will wind up this article with a quote from one of my role model. The founder of the Grameen bank, which has played and continues to play a vital role in poverty eradication, Professor Muhammad Yunus once said,

“People were poor not because they were stupid or lazy. They worked all day long, doing complex physical tasks. They were poor because the financial institution in the country did not help them widen their economic base.”