The above agreement which is to be signed with China Merchant Port Holdings Company Ltd (CMPort) was presented to the cabinet earlier and it has been revised to be more beneficial to Sri Lanka. 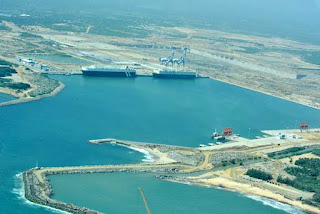 Under the agreement Sri Lanka Ports Authority as the Public partner and aforesaid company as the private partner will establish the following companies.

Accordingly, instead of 80:20 share distribution in the initial agreement, shares of overall investment will be revised as 69.55 to CMPort and 30.45 for SLPA.

The lands will be only given to newly establishing 02 companies on lease basis and their shares are allowed to be purchases by SLPA as follows.

After 70 years of effective date of agreement at a fare rate decided by Government Assessor and an independent assessor.

After 80 years of the effective date SLPA has the right to purchase shares of CMPort and its affiliated companies at a rate of USD 01 as the SLPA's share holding in HIGP to be 60% and HIPS to be 76.8%.

After 99 years of effective date all the shares of CMPort and affiliated companies should be transferred to SLPA at a rate of USD 01.

The sole authority of managing the defense situation of the port is Sri Lankan government and use of the port in military activities is prevented.

According to the proposal made by Mahinda Samarasinghe, Minister of Ports and Shipping, the Cabinet of Ministers has approved to obtain opinion of interested parties further, and table it in parliament and do further amendments according to proposals made at the parliament and subsequently to accept and sign the agreement.

An review on south Asian container ports will be available soon